Does a franking machine need a phone line? Analogue vs Digital

Get A Free Quote / Need Help?

Does a franking machine need a phone line? Analogue vs Digital ...

Back then, it was the only way for franking machines to receive price and credit updates – but it was slow, unreliable and costly. You’d sit in the office for hours, waiting for the machine to download the rate and credit updates while everyone else went home.

Now it’s all digital. Franking machines can be connected via broadband connections (most modern franking machines have Ethernet ports) and are accessible through local area networks (LANs).

It’s a massive shift away from analogue, and if you’re still using analogue, you could be missing out on tremendous potential savings.

In this blog, we’re going to talk about both analogue and digital machines and compare them.

As mentioned previously, analogue franking machines need to be connected via a phone line to receive rate and credit updates. Because speeds are about 50-56 kilobytes per second, these updates can take an incredibly long time.

Digital franking machines, on the other hand, connect directly to the internet using broadband. This means their processing speed is equivalent to the speed of the broadband in use. Speeds could be anywhere from 15 megabytes a second (already more than enough) to 300 megabytes a second.

As a result, updates are completed instantly and franking machine downtime is minimal.

From a management perspective, analogue devices were a nightmare. With analogue, if there was something wrong, you would only know when the machine stopped working.

However, with digital devices, because they can be connected to a LAN, and by extension the internet, manufacturers and suppliers can readily track performance. This ensure problems are flagged t before they become business-critical issues.

Buying an analogue device in this environment is, therefore, risky. There’s no guarantee that it will still be in use in the near future or that suppliers will have the parts or consumables required.

Furthermore, because suppliers are training engineers on digital models, support for older, analogue models might be difficult to find.

Frama, for example, announced in 2017 that there was a connection issue with analogue franking machines that was outside their control. This was due to the fact that analogue phone lines were being phased out in parts of Europe and international phone carriers were withdrawing support.

Digital franking machines are not subject to these issues as they use broadband connections. Of course, even digital models can become obsolete – especially as new franking machine functionalities are rolled out.

Analogue devices also lack automatic updates, the ability to print pre-paid reply envelopes and reclaim VAT on postage (Smart Meter technology). All of which can be done (easily) on a digital franking machine.

Also, digital franking machines can be used to personalise mail items – they can download logos and slogans to be applied to mail.

So if you’re considering a franking machine, go digital. Not only will you benefit from features like Mailmark, Smart Metering and automatic updates – it’ll be easier to maintain and last longer.

It makes more business sense to buy a modern solution than one that will be outdated in the next few years. Even if cost is a key consideration, there are plenty of affordable digital franking machines on the market. Just have a look at our portfolio – you might find something that interests you.

For more advice on purchasing a franking machine and details of the key features, click here for our ultimate guide. 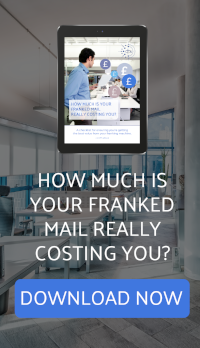 Contacting us is fast and easy.

With over 40 years combined experience in the franking machine industry, we have the knowledge and experience to provide the very best postal solutions for your business.

All Credit card data is handled by Sagepay secure systems and processed via the Sagepay payment system and requires CVV2/CVC2 verification.